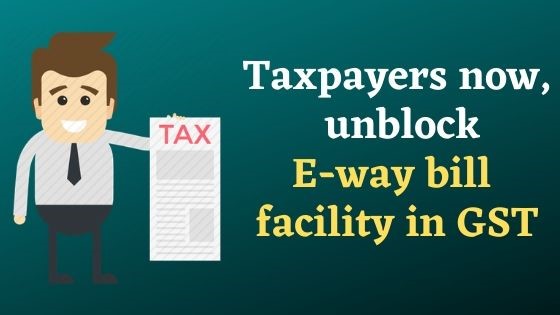 Facility for Taxpayers to unblock e-way bill in GST

Description: There is no need to panic if the facility of issuing the e-way bills of a businessman is blocked in the GST registration system.

What is an e-way bill in GST?

Its full form is an electronic waybill, here it is a different type of  bill which is made by electronic means. Which is used/generated at that time when the goods are moved from one place to another place. it is required for those goods whose value is more than Rs. 50,000 as per the current GST regime.

Why is the taxpayer GSTN blocked for e-way bill generation facilities?

The GST Council had started several months ago to block the e-way bill of those businessmen who are not filing GSTR-3B.

Subsequently, the taxpayers issuing e-way bills on the portal were marked that the facility would be withdrawn for not filing two consecutive monthly returns.

According to data from GSTN, about 20.75 lakh GST number holders did not file monthly returns in September and November. After this, their facility to issue e-way bills was blocked. However, now GSTN has given the option to the taxpayers to unblock e- way bill systems.

How to unblock the facility of generating E-way bills in GST?

He can also request for unblocking the e-way bill generation facility with the tax officer of his jurisdiction.

How can a taxpayer apply for unblocking the e-way bill generation facility?

If the taxpayer’s e-way bill facility is blocked, will the in-transit goods be affected?

If an order is issued for the rejection/acceptance of the unblocking request made by the taxpayer, the email and SMS of the acceptance/rejection of the order will be sent to the taxpayer on their registered email ID and mobile number. The taxpayer can view this order on the GST portal via login to the portal. To know more about the orders issued by the officer, expect for the next article.

Stakeholder Feedback Day on GSTR was arranged on 7 December

Central and state governments organized Stakeholder Feedback Day on 7 December to seek feedback from traders on GST returns. This response will be taken from April 1, 2020, for the new return form.

To organize a nationwide GST Stakeholder Feedback Day on the new GST return on 7 December for on-the-spot feedback of new GST returns to be offered to the Central GST and State GST authorities from 1 April 2020.